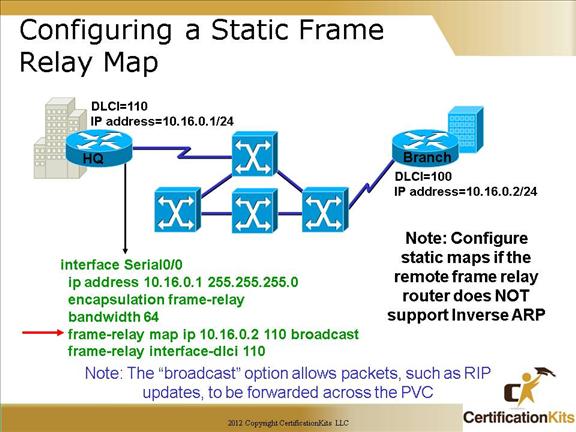 
This is a picture of frame relay and it works a bit different. The idea behind frame relay is that you have a single infrastructure from the service provider and multiple customers are connected to it, effectively sharing everything. This icon is the frame relay switch. What else do you see? There are two customers 1 and 2 and each of them has a Headquarters Hub and a branch office Spoke. All of them are connected to the frame relay cloud. In the example above you can see two virtual circuits , the green and blue one. The physical connection is just the serial cable which is connected to the provider.

By default all DLCI numbers are assigned to the physical interface…. We use this on frame-relay multipoint interfaces where we can reach multiple routers through the same PVC. The DE bit indicates that the frame has a lower importance. When there is congestion, the frames with the DE-bit set can be dropped. Point-to-multipoint means you have the split-horizon problem but you can use a single IP subnet for all PVCs.

Use the no form of this command to delete the map entry.

There can be many DLCIs known by a router or access server that can send data to many different places, but they are all multiplexed over one physical link. The optional ietf and cisco keywords allow flexibility in the configuration. If no keywords are specified in the configuration, the map inherits the attributes set with the encapsulation frame-relay command. You can also use the encapsulation options to specify that, for example, all interfaces use IETF encapsulation except one, which needs the original Cisco encapsulation method, and it can be defined using the cisco keyword with the frame-relay map command.

The broadcast keyword provides two functions: It forwards broadcasts when multicasting is not enabled, and it simplifies the configuration of OSPF for nonbroadcast networks that will use Frame Relay. The broadcast keyword might also be required for some routing protocols--for example, AppleTalk--that depend on regular routing table updates, especially when the router at the remote end is waiting for a routing update packet to arrive before adding the route.

By requiring selection of a designated router, OSPF treats a nonbroadcast, multiaccess network such as Frame Relay in much the same way as it treats a broadcast network. In previous releases, this required manual assignment in the OSPF configuration using the neighbor interface router command. When the frame-relay map command is included in the configuration with the broadcast , and the ip ospf network command with the broadcast keyword is configured, there is no need to configure any neighbors manually.

The following example illustrates a command sequence configuring an IP map associated with interface serial 1 to enable active TCP header compression. Use the frame-relay multicast-dlci interface configuration command to define the DLCI to be used for multicasts. Use the no form of the command to remove the multicast group. Use this command when the multicast facility is not supported. Network transmissions packets sent to a multicast DLCI are delivered to all network servers defined as members of the multicast group. To enable the stack payload compression on a specified point-to-point interface or subinterface, use the frame-relay payload-compress packet-by-packet interface configuration command.

To disable payload compression on a specified point-to-point interface or subinterface, use the no form of this command.

In addition, the DLCIs mentioned in this command must be defined before this command is used. If you do not explicitly specify a DLCI for each of the priority levels, the last DLCI specified in the command line is used as the value of the remaining arguments. For example, the following two commands are equivalent:. Use the frame-relay route interface configuration command to specify the static route for PVC switching.

If the outgoing interface is a tunnel, the final PVC status is determined by what is learned from the tunnel. If the tunnel goes down, it is reflected by its line protocol when it does not have a route to the other end of the tunnel. Enter the show frame-relay route EXEC command at the system prompt to display all configured Frame Relay routes, along with their status.


See the Frame Relay Interface specification for additional explanations of this output. See the description for the show interfaces command for a description of the other fields displayed by this command. Optional Uses Cisco's own encapsulation, which is a four-byte header, with two bytes to identify the DLCI and two bytes to identify the packet type.

This is the default. Use this keyword when connecting to another vendor's equipment across a Frame Relay network. You must supply one of the following: fragments --Classify fragmented IP packets. Indicates the IP address of the serial interface of a new access server onto which an access server configuration file is to be autoinstalled over a Frame Relay network. See the "Usage Guidelines" section for information about when to use this option.